Day two began bright and early to the smell of toast and warm goat’s milk. We sat around the ger munching and chatting before saying our goodbyes and piling into the van. As we drove away into the nothingness we were pleasantly told that today would be a short driving day. Only about two hours until we reached our first “ger camp.”

A ger camp is basically Mongolia’s answer to a motel. There are hundreds scattered around Mongolia, plots of land with anywhere from five to twenty-five gers, all available to rent for the night. Most camps came with a dining hall building and Mongolian standard bathrooms. Ours even came with a shower, but none of us took the opportunity due to how chilly it was. 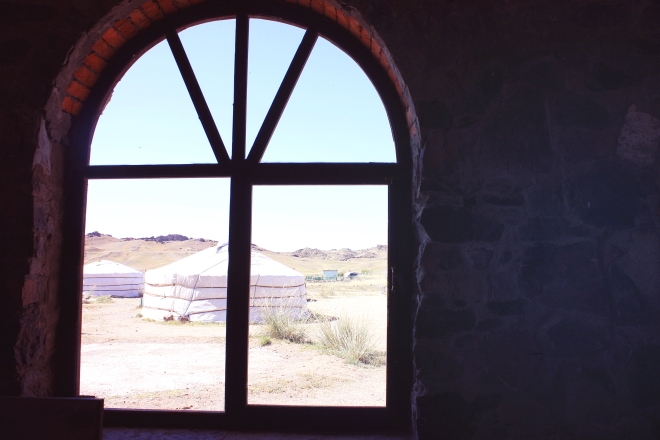 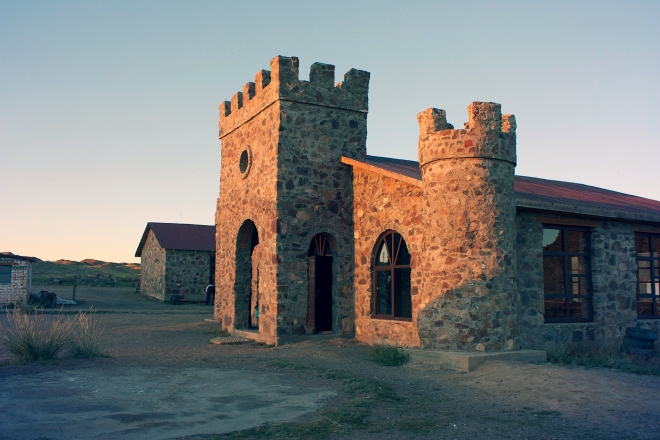 Each ger had four beds and this was the only place for the entire week that we had an outlet to charge our electronic devices. The outlet had exposed wires and could probably have killed us if we touched it incorrectly, but hey, I gotta charge dat camcorder. We ended up pulling in one more mattress so our lovely tour guide could join us and not have to sleep by herself in a neighboring ger. 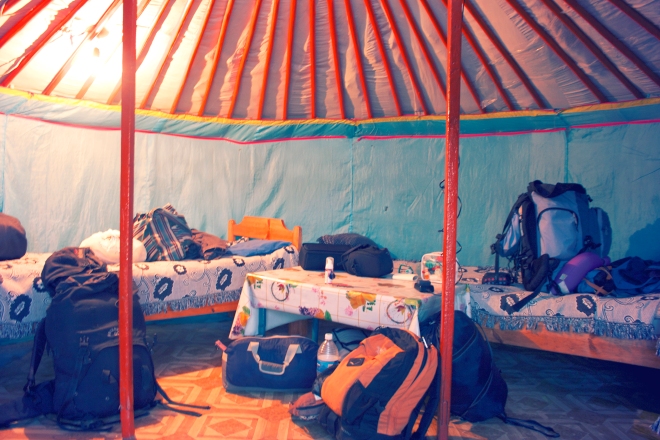 Next, it was time to get exploring. A beautiful thing about Mongolia is that there really aren’t many rules. If you see a rock you want to climb, by golly, go climb it! In the US, there are “No Trespassing” signs everywhere and you just assume that someone owns that plot of land perfect for frolicking in. But since I had pretty much free range, I decided to go wandering. The surrounding area was breathtaking. The landscape was that of another planet. I felt like I had walked into a Tolkien novel or been transported to Naboo. Everything felt so foreign and yet tremendously right. This is the world unspoiled, and it is beautiful. 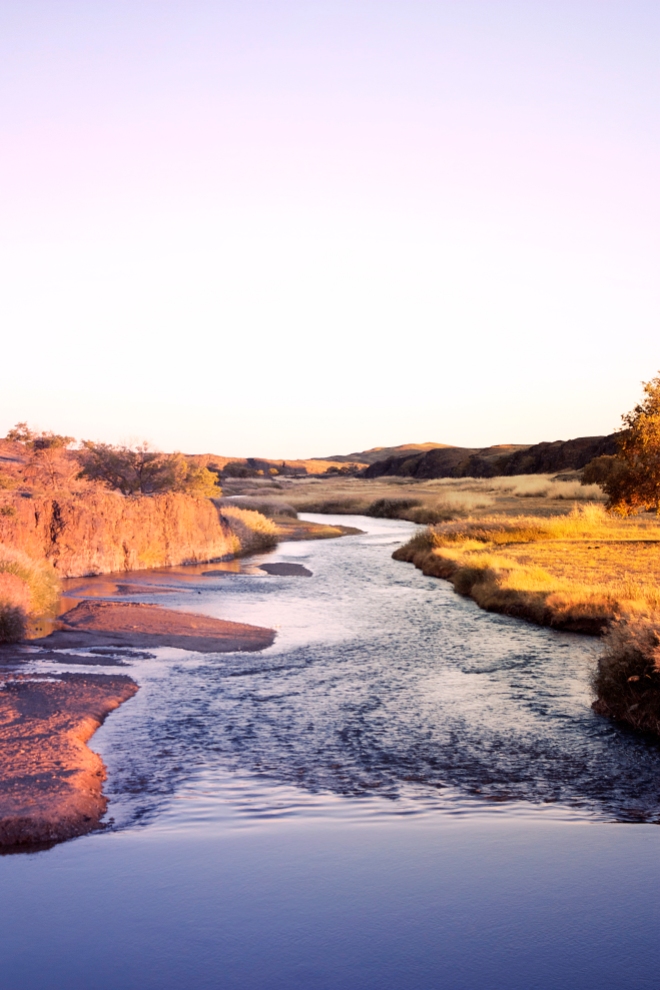 We were then informed that it was time to walk to the nearby Buddhist Monastery. As we trekked up to the Monastery we met up with our monastery guide dressed in traditional attire. Unfortunately, I was not permitted to take photo or video inside the temple or the adjacent museum. They were having a celebration the day we were there so we got to observe a special ceremony. I have lived and travelled around Asia for four years and have been in more temples than I can count, but I must say this was one of the most surreal moments of my life. I had dreamed of visiting Mongolia for years and when I thought about my potential adventures in this isolated country, this experience in the monastery was when it hit me that that dream had actually come true. As the cool wind whipped through the open door, my eyes were drawn to a nearby window. The view outside is one that I will never forget. The desolate, rolling hills and few people that made their life deep in the Mongolian countryside was awe-inspiring. I never thought I would find myself in this tiny spot in the world and I know how lucky I am to see a place that so many will never get the chance to. 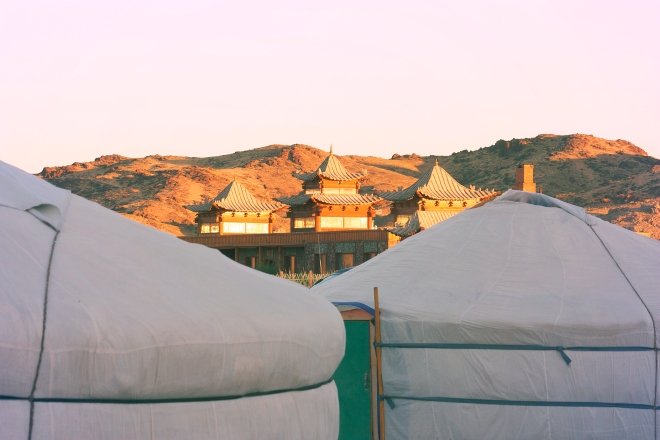 As we left the temple we climbed up a hill to take in the surrounding country. We then decided that the weather was just too beautiful to go back to the gers and took it upon ourselves to blaze our own path. We walked along a stream looking for a bridge to cross it. Once we gave up on finding one, we chose to just take off our shoes and cross it barefoot. From the water we saw a huge rock formation in the distance and decided it was a great idea to climb said rock. 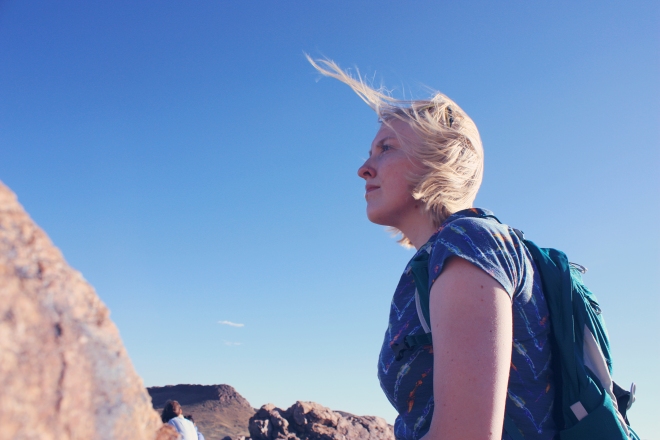 Once we found a safe-ish way to the top of the rock we sat and took in the sights. I know I keep going on and on about how beautiful the landscape was, but it really was unlike anything I had ever seen before. Also, the silence. Mongolia is known as the Land of the Blue sky, and once you visit, you’ll know why. The sky is expansive with not but maybe one or two clouds scattered across the blue. I’ve seen beautiful blue skies for 24 years, but coming to Mongolia made me sit back and appreciate it like never before.

We slowly climbed down and crossed the stream back to our camp. I took deep, healthy breaths as I walked, being sure to drink in every smog-free gulp. Mongolia seems to be lost in time. It’s the type of place that wouldn’t really be shocking to hear that a dinosaur has been secretly surviving in for thousands of years. We had a nice dinner and watched the sun go down before crawling into our beds for the evening. Today was a short day but filled to the brim with the glorious natural wonders that surrounded us.