For some reason, not many people think to visit Mongolia. I guess they picture a barren and icy land with little to offer. Although they could not be farther from the truth, I selfishly hope Mongolia stays free from the tourists, just so I can keep all the rich history and culture to myself on my future trips back to this glorious land. In a word, this place is magnificent. I don’t remember when I first developed the desire to visit the country; it must have been some day in middle school as I first glanced through the pages of my history book highlighting the rise of Genghis Khan or saw a photo of a ger for the first time. Maybe I related to the nomads on some level due to my family’s constant movement or possibly the wide open spaces called to every fiber of my being. Whatever it was, once I moved to Hong Kong I knew I was finally close enough to make that dream journey a reality. 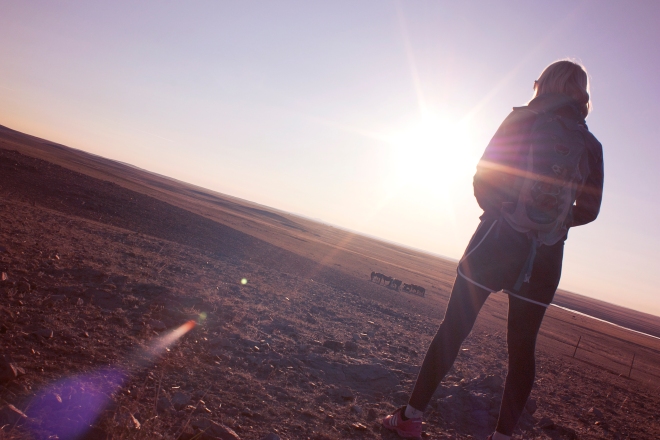 After a tumultuous arrival day in Ulaanbaatar I was ready to begin my Mongolian adventure. I had booked my trip through Sunpath Mongolia, a dual hostel/organized touring company with the best reviews in Ulaanbaatar. They had a tour called The Golden Gobi which consisted of about six days of hardcore desert exploring, exactly what I wanted to do. Prior to arriving in UB, as Ulaanbaatar is affectionately known, the set up with Sunpath was wonderful. The tour was reasonably priced at $420 for an all inclusive 6 day tour. I’m sure you can find less expensive options if you have the time, but for what I was given, this price it was worth every cent. All our food and water was provided, and we had an awesome English speaking guide and a great driver. 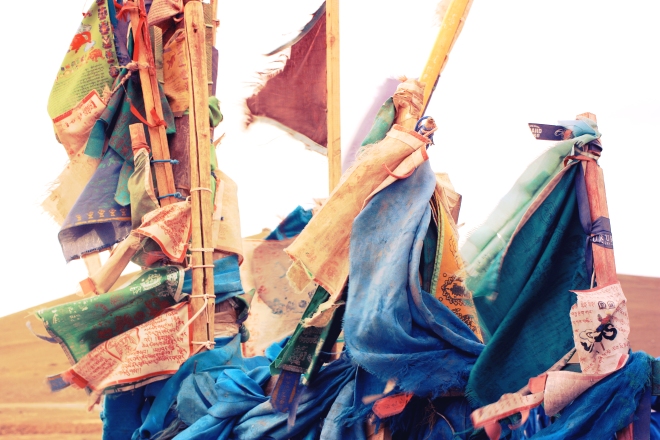 I was picked up at my hotel by Sunpath where I was taken to the hostel to meet up with the rest of my group. Surprisingly, it ended up simply being only myself and another group of three. One member of the group had actually contacted me a few days before the tour using another travel blog for which I had commented on a Mongolian post. See, the travel community is a magical place! We all piled into our 1960s era Russian van and were off.

Day one consisted of a lot of driving. As we left UB we stopped off at a supermarket where we could grab some extra snacks and water if we so chose. This was also where our guide bought all of our food for the week so if you have any dietary restrictions, that would be the time to let them know. We drove for about two hours on a paved road and then the fun began. We pulled off and began our off-roading experience which would consist of 90% of our time in Mongolia. Mongolia is the ninth largest country in the world but you could fit all the Mongolian roads into the Dutch road system sixty seven times! Basically, you pave your own path in Mongolia. Now, what does this off road situation feel like? Well, on a good stretch it’s like riding on the oldest wooden roller coaster in the world; on the crazy, jumble your brain into jello sections, it’s like riding a bucking bronco. Somehow the others on my trip were able to sleep, I however, whether due to the bouncing or the incredible landscapes outside my window, was not able to do so. If you have any inclination of motion sickness, make sure you come prepared. I swear by Seabands. 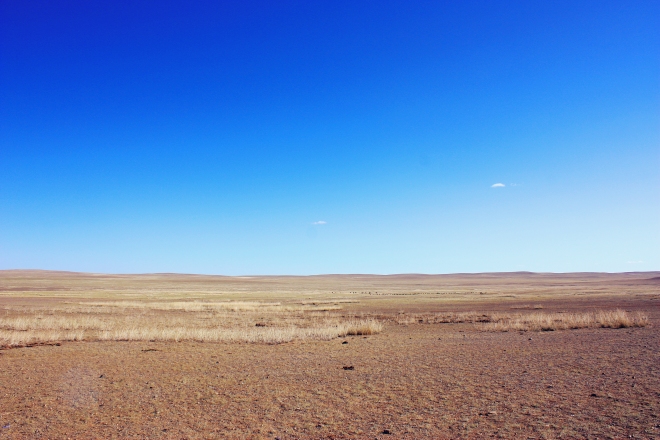 We stopped off for lunch where we got not only our first taste of Mongolian cuisine, but also what our toilets would be like for the next week. The restaurant itself was in the middle of nowhere and must only survive due to the tour groups visiting every day or so. After having mutton for the first time I headed out back to check out the toilet situation. Did you see the movie Slumdog Millionaire? Do you remember at the begin of the film when the little boy decides to jump into a literal pile of crap in order to procure an autograph from his favorite actor? Yeah, those toilets are what we dealt with the whole week. Obviously, there is no plumbing out in the wilds of Mongolia so the toilets consist of two planks and a deep whole filled with sh*t. Sorry for the language but poo just isn’t a strong enough word. Most of us ended up choosing to use a bush and mother nature to relieve ourselves instead of the former for much of the week. I was lucky enough to have brought along a Freshette which allows us ladies to pee in a standing position. This saved me. The greatest purchase I’ve possibly ever made.

After lunch we drove for a few more hours, the landscape changing before our very eyes. We drove past hundreds and hundreds of sheep and goat herds as well as horses. Mongolia reveres the horse with high honor and these creatures are ravishing to behold. At one point we pulled over to snap some photos, even getting to observe a Mongolian cowboy herding the horses. In the same area was a famous mountain for which the Mongolians will not utter it’s name. It is traversed four times a year to bring offerings but can not be climbed by a woman. Phewy. 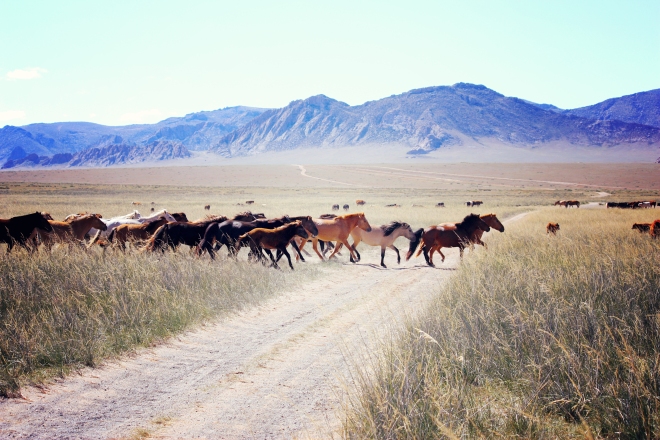 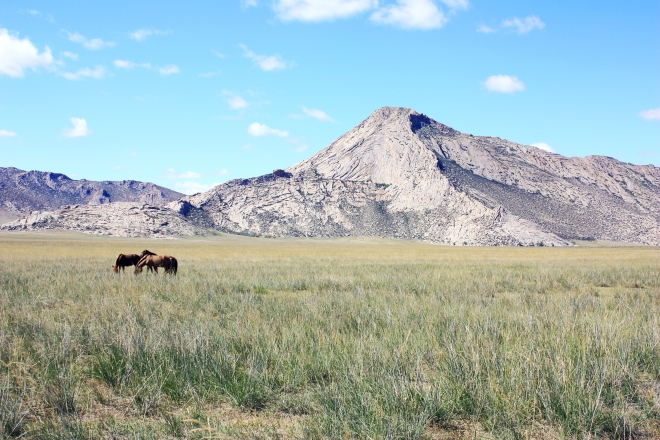 Finally we drove up to a set of gers in the middle of nowhere and after a moment of our tour guide communicating with the  family it was announced that we would be staying with the family for the night. A ger is a traditional home of the nomadic Mongolian people. It consists of white fabric and poles which can be set up and torn down with relative ease to ensure movement when needed. The whole family will sleep in one ger. The ger is broken into the wife, husband, and guest sections and in the middle sits a stove for cooking and warmth. We learned that in order to ensure bad luck is not placed on the family it is important to always step with your right foot first into a ger. Mongolians have a lot of customs, fyi. The Mongolian people are incredibly hospitable and always have food, milk, and a bed waiting if a guest shows up at anytime. They basically never say no to a visitor. 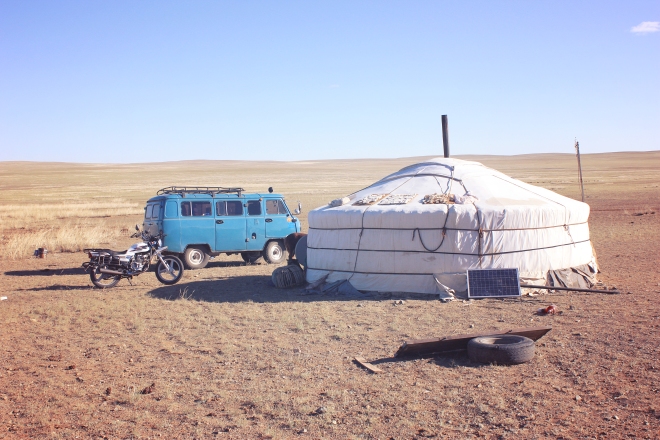 This was where my trip to Mongolia highly differed to my time in Thailand. Although Thailand is a wonderful place and has many, many redeeming qualities, many of the tours to “tribal villages” are very staged. They are filled with tourist traps and more of a homage to what once was rather than what is. Our time in Mongolia, however, was as authentic as could be. We stayed with real families, ate their food, and observed their real day-to-day existence. That’s what travel is all about to me and I loved every second of it. 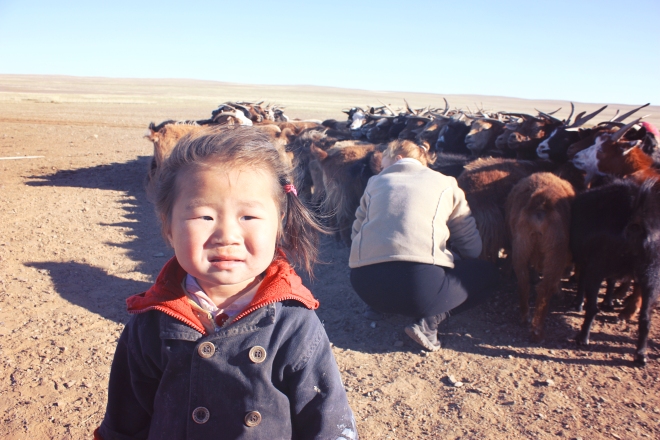 We met the family and I immediately hit it off with the three kids. I mean, my job is communicating with children who don’t speak my language so it wasn’t difficult to become buddies. They were enthralled with the cameras that I pulled out as the family began preparations to milk the goats. The goats are led into a certain area and then tied together in lines in order to ensure quick and organized milking. It was fascinating and unlike anything I’d ever seen. I took a few photos before the kids snatched my cameras for selfies. I guess a selfie is universal? 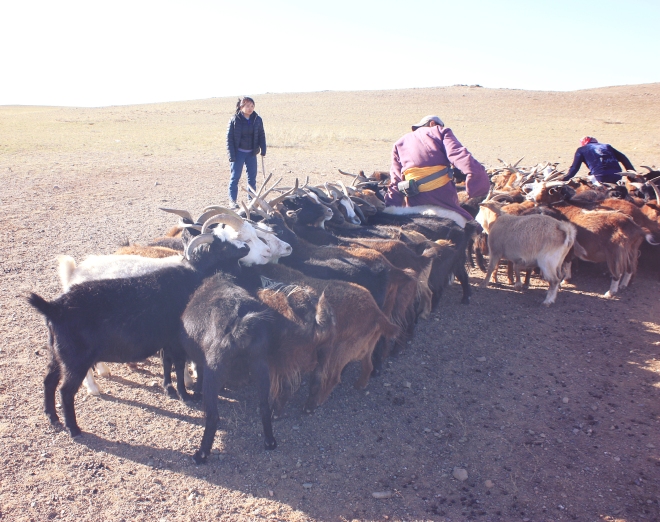 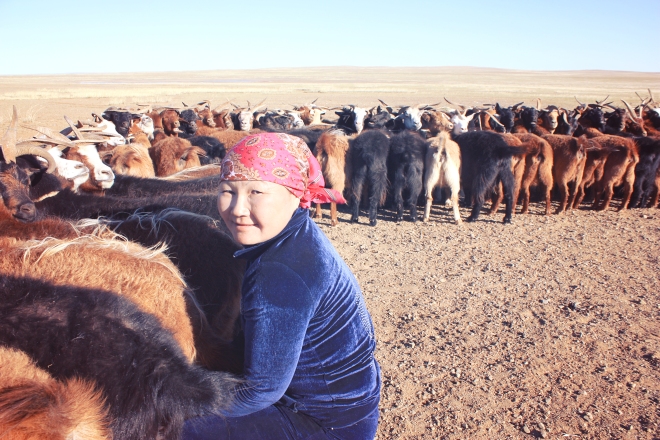 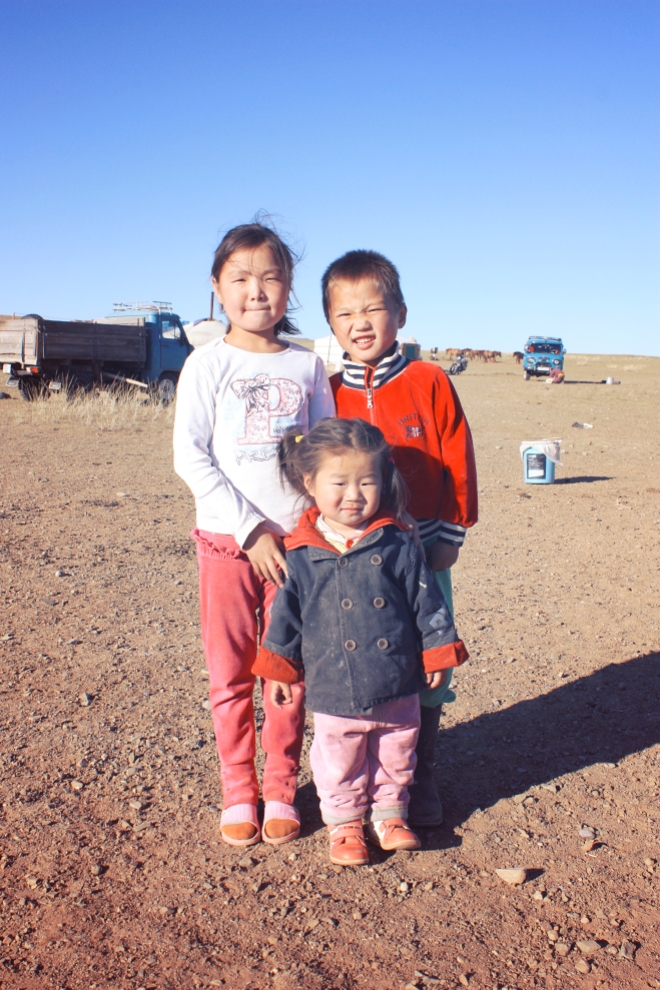 I spent the day running around with the children, drinking in the splendor of clean air. The silence was defining and oh, so beautiful. When evening rolled in we gathered in the ger for some dinner and listened as the family sang us some songs. We drank fermented mare’s milk which is how Mongolian’s make their famous vodka and ate delicious, homemade soup.

Once it was dark it was time to see the stars, one of the main reasons I chose Mongolia in the first place. It was unlike anything I could ever dream to describe in mere words. Light pollution isn’t even a term in this part of the world. To look to the skies and see the milky way, clear as day, from one horizon to the next is the most exquisite thing I have ever beheld. I don’t think anything could ever top that sight. To think that God created all that majesty for our pleasure is beyond what I can comprehend.

When it was time for bed we rolled out our sleeping bags (this was the only night we slept on the floor) and got cozy. It ended up being eleven of us to one ger. I fell asleep to the desert sounds and woke to the sweet smell of sunrise. 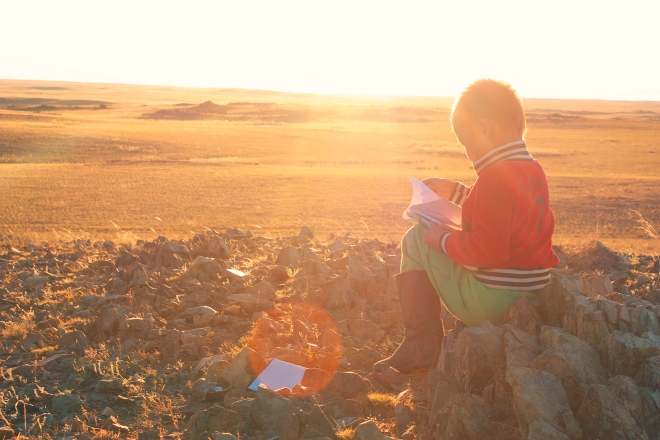 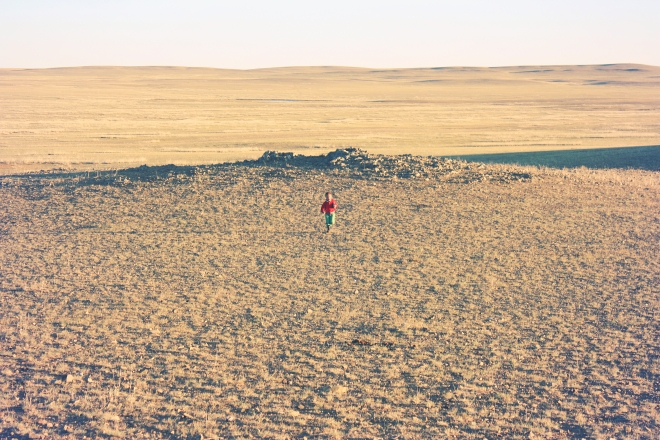 After a short breakfast and a snuggle with a pup, it was time to head off to our next destination. It was tough to leave and we all agreed that no matter what the rest of the week held, this would be a highlight of the trip. Although it was such a short moment in everyone’s life, a quick crossing of lives, it had a profound impact on me. And that was only the start of my fall for the Mongolian way of life… 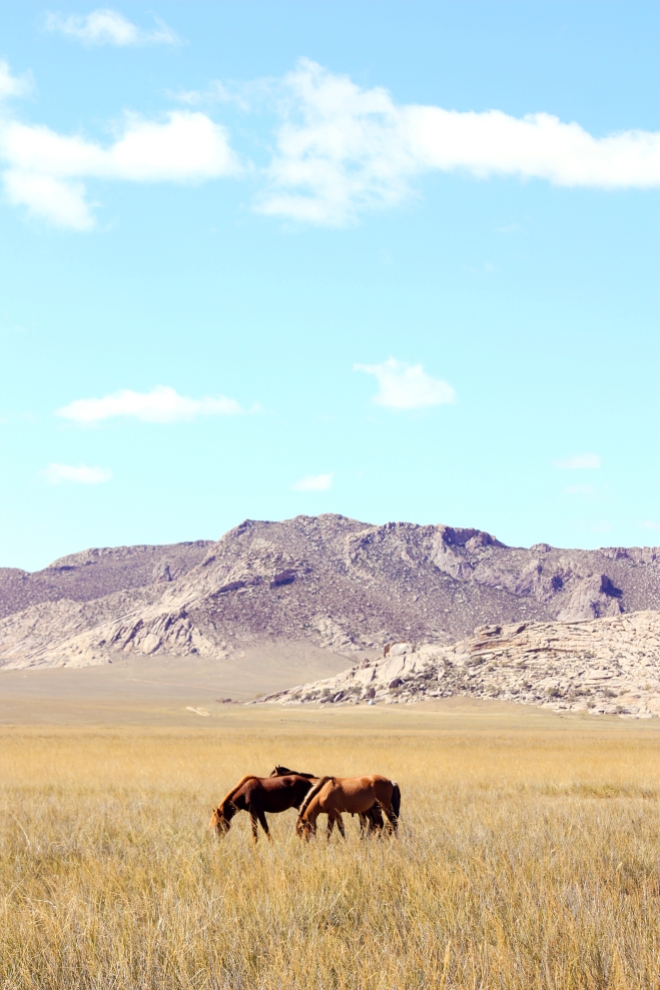 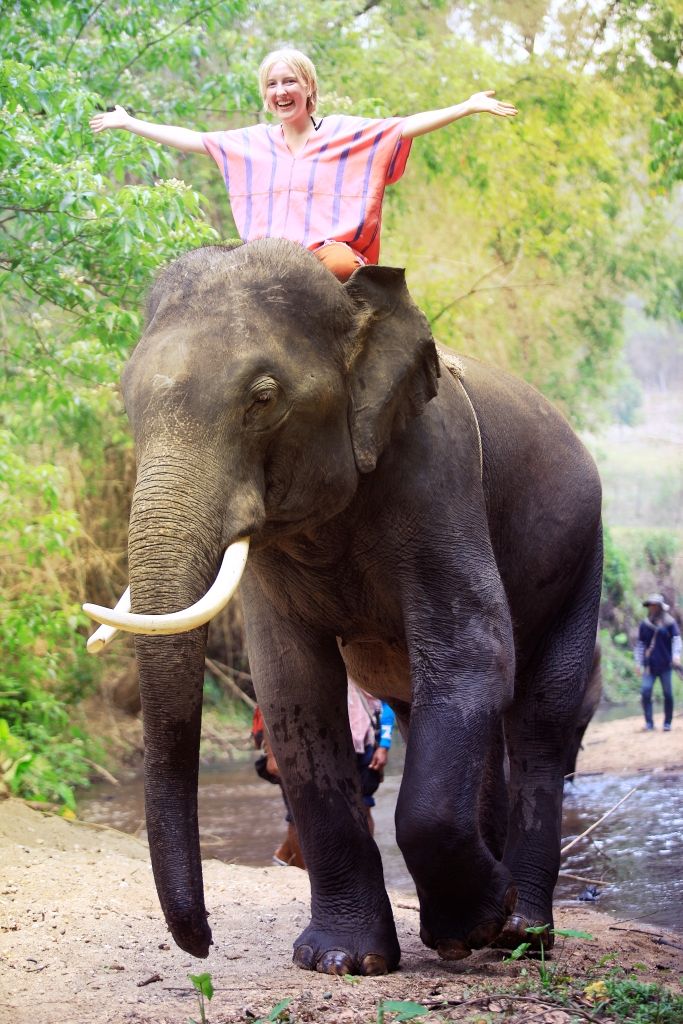